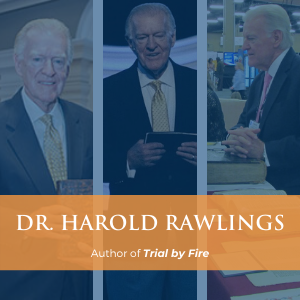 After retiring from years of pastoral ministry, Dr. Harold Rawlings began thinking of ways he might encourage Christians in areas they know little about. He considered that most people don't know the cost involved and the martyrdom connected with translating the Bible into English. That was a story he wanted to tell. So, about 18 years ago, he started collecting Bibles, and a year later he started taking his collection of ancient Bibles on the road to churches and schools. He offers a fascinating illustration of the story of lives lost in trying to get the Bible into English.

Trial by Fire: Influential Bibles in World History is a masterful class that discusses the historical, political, and religious narrative of how the English Bible was made. We all know that the Bible is the Word of God, but did you know that only a select few were allowed to read it for many years? Scholars like Erasmus, William Tyndale, and John Rogers defied the accepted tradition of how the Bible is presented and worked hard to make it available to many. By the end of this program, you will gain a greater appreciation of the Bible as well as:

You know the value of something by the price that was paid to acquire it. The Bible you hold in your hands is priceless because it cost many great men and women their very lives.